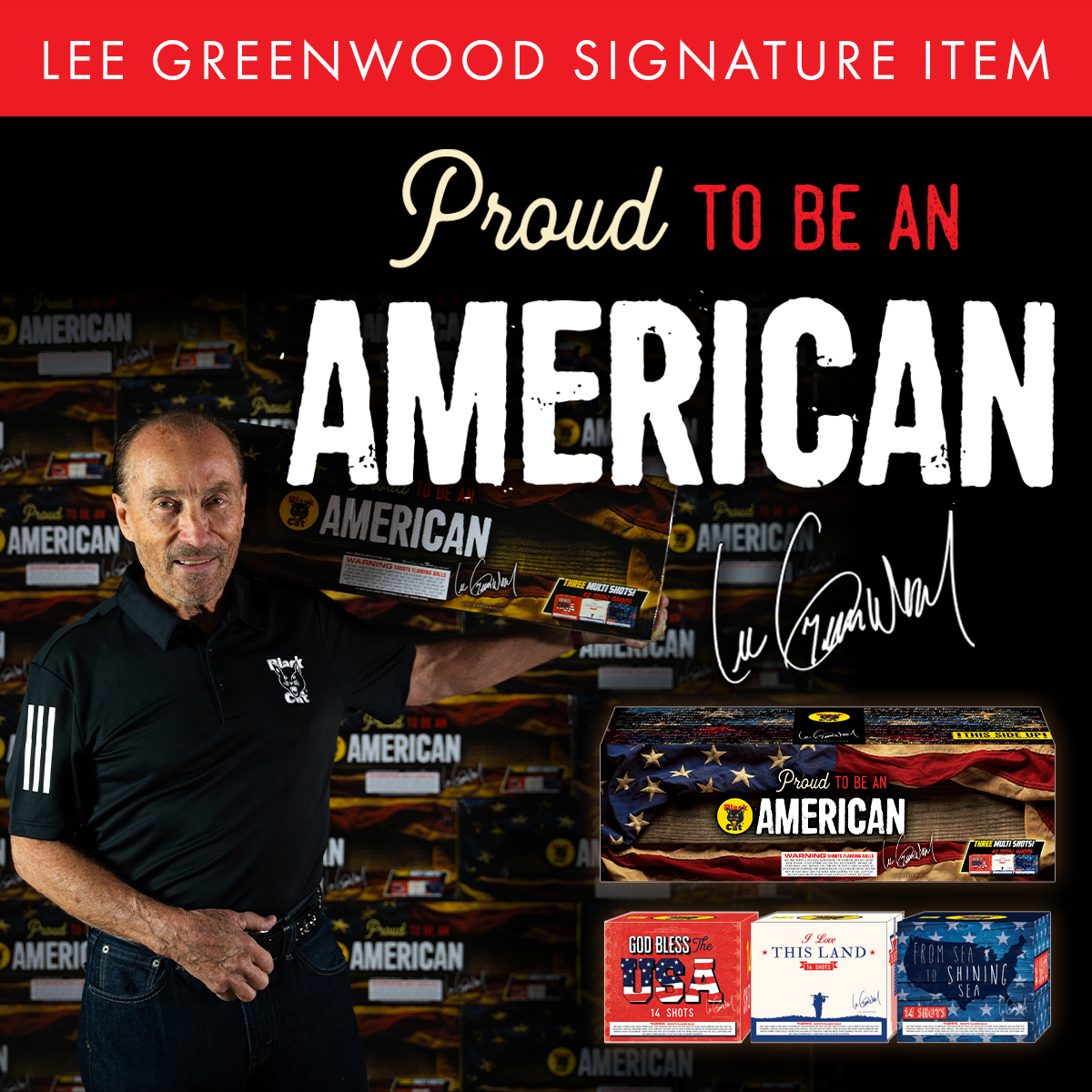 NASHVILLE, Tenn. – Lee Greenwood, the Grammy-award winning artist known as America’s Patriot, and legendary global firework manufacturer Black Cat® have teamed up just in time for the 4th of July to introduce a brand new, spectacular red, white, and blue ‘Proud To Be An American’ Lee Greenwood signature 42-report patriotic firework to the public. The firework will be available in select locations starting May 17th in time for Memorial Day and everywhere in time for the July 4th season.

The Proud To Be An American Lee Greenwood signature firework features three separate cakes: God Bless The USA (14 shots/red), I Love This Land (14 shots/white), and From Sea To Shining Sea (14 shots/blue).

“I have been looking forward to this for a long time!” says Lee Greenwood. “The 4th of July is one of my favorite holidays to honor our veterans and celebrate freedom. Partnering with Black Cat® was a natural fit – and they put together a beautiful assembly of red, white, and blue to honor our great country. I want to thank Chris and their whole team for creating such a beautiful product that everyone can enjoy.”

“When you think of patriotism and music and celebrity in America, you turn no further than to Lee Greenwood,” says Chris Noland, VP of Marketing and Brand Development, Black Cat® Fireworks, USA. “Lee is the undisputed ‘Mr. America’ and his music is featured all over the United States every year at fireworks celebrations in cities great and small. We were ecstatic when his team came to us with this partnership opportunity, and we are even more elated to finally bring this creation to market. We hope everyone will enjoy and celebrate together — it’s our proudest creation to date!”

The partnership between Black Cat® and Lee Greenwood was brokered by Spinning Plates Marketing with legal representation by John Mason.

For more information about Black Cat® Fireworks or to find a retailer near you, please visit BlackCatFireworks.com.

To see the latest product from Black Cat® Fireworks visit our YouTube channel at youtube.com/blackcatfireworksusa.

About Black Cat®:
The Black Cat® brand was introduced in the US in the 1940s and is now the oldest and most highly recognized fireworks brand in the country. Over the past 70 years, Black Cat® evolved from the basic firecrackers to a product line that contains over 500 items today! Continued focus on quality and innovation has made Black Cat® an International Brand, with presence in markets all around the world.

Black Cat® continues the tradition of celebrating with fireworks that started in China several millennia ago. Around 200 B.C., people began roasting bamboo stalks until the air inside the hollow stalks would get hot enough to sizzle and explode. That is why the Chinese term for firecrackers means “exploding bamboo.”

As gunpowder and fireworks spread from China to Europe over the Silk Road, fireworks began to become part of official celebrations, including the annual displays at Castello Sant’Angelo in Rome to the coronation of Anne Boleyn as Queen of England in 15331. Henry VII celebrated with a magnificent display at his wedding in 1486, there were regular displays at the Palace of Versailles in Paris, and Peter the Great of Russia sponsored a marathon 5-hour display for his son’s birth.

In the US, the first July 4th celebration happened during the Revolutionary War. Since that time, fireworks have become synonymous with celebrating our country’s Independence Day. Black Cat is proud to be a part of this important and fun American tradition.

About Lee Greenwood:
Throughout his expansive career, international country music icon Lee Greenwood has earned multiple CMA and ACM Awards, a Grammy Award for Top Male Vocal Performance on “I.O.U,” in 1985, and a multitude of other prestigious awards nominations. His discography includes twenty-two studio albums, seven compilation albums, seven No. 1 hits, and thirty-eight singles including songs like “It Turns Me Inside Out,” “Ring On Her Finger Time on Her Hands,” “She’s Lyin’,” “I Don’t Mind the Thorns if You’re the Rose,” “Dixie Road,” “Somebody’s Gonna Love You,” “Going Going Gone,” “You Got A Good Love Comin’,” among others. His stand-out hit “God Bless the U.S.A.” has been in the top five on the country singles charts three times (1991, 2001, and 2003), giving it the distinction of being the only song in any genre of music to achieve that feat. It reached the Top 20 of the Billboard Hot 100 chart shortly after 9/11. Known for his stand-out patriotism and support of the U.S. military, Greenwood has been honored with the Congressional Medal of Honor Society’s National Patriot’s Award and entertained troops on more than 30 USO Tours.

For more information and to check out Lee’s tour itinerary, visit leegreenwood.com.

For Lee Greenwood images and other assets, visit 2911.us/project/lee-greenwood.

Listen to Our Podcast